Find out more on Camden's guidance and support available to Ukrainian nationals, their family members and hosts

Decentralised Energy Networks (DENs) have been identified as a principal method for Camden meeting its 27% by 2017 and 40% by 2020 carbon reduction targets. In 2015 we devised a DEN strategy for Camden which concluded several priority areas in which they could be developed. A copy of the study can be downloaded. 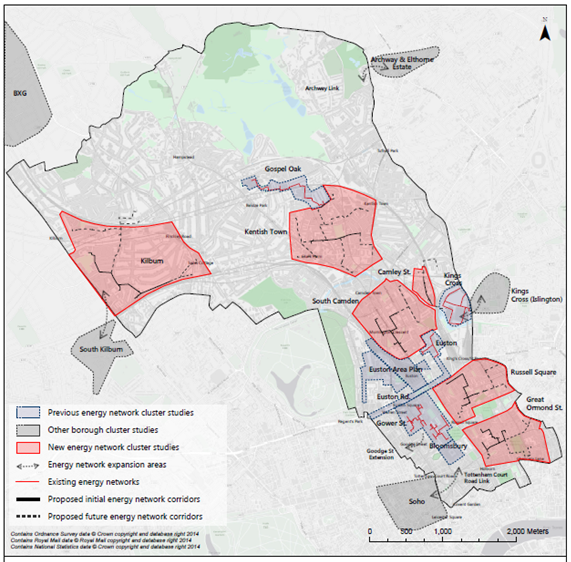 A Decentralised Energy Network (DEN) is now operational Somers Town, supplying heating and hot water to 339 homes across four estates: Monica Shaw Court, Oakshott Court, Clyde Court and the Goldington Estate. A Combined Heat and Power (CHP) unit is currently being installed which will produce low carbon electricity with a view to supplying the Francis Crick Institute, who has also helped fund the scheme. CHP is a technology that simultaneously generates heat and electricity.  It can be used in a single building with appropriate heating and electrical demands, but it works particularly well when a number of varied heat demands (for example, schools, housing and hospitals) are connected to the CHP through a district heating network. Updates on the project can be found below.

To get a better understanding of the project and how DENs work, please see our short film below.

The Gospel Oak network provides approximately 50% of the heat required for 1,449 homes across six estates, using waste heat from the Royal Free Hospital’s CHP. As a result of this scheme, around 2,800 tonnes of CO2 are saved per year.

The Bloomsbury Heat and Power Network is owned by a consortium of Bloomsbury universities and provides electricity and heat from two CHP units to  a number of  college buildings including Birkbeck and SOAS.

Argent has built a network in King’s Cross as part of their site-wide regeneration works. The energy centre for the site has been operating since 2012 and currently contains two CHP units with a third planned for future installation.